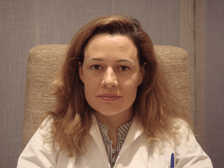 María Dolores Braquehais Conesa, M.D., Ph.D. was born in 1974 in Mallorca (Spain) and currently lives in Barcelona. She is the Clinical Director of the Inpatient Unit of the Barcelona Integrated Care Program for Sick Physicians and Nurses. Dr. Braquehais Conesa also works in the Liaison Psychiatry Program of the Vall d’Hebron Hospital.

Dr. Braquehais Conesa graduated in Medicine and Surgery from the Complutense University in Madrid in 1998 with the highest degree. She did her Residency in Psychiatry at the Ramón y Cajal Hospital in Madrid in 1999-2003. In 2003, the Ramón y Cajal Hospital selected her as one of the three best residents of the year. In 2006, she obtained a Summa Cum Laude Ph.D. degree from the Alcalá de Henares Medical University in Madrid for her doctoral dissertation: “The role of impulsivity and aggression in suicide attempts”. Dr. Braquehais Conesa’s main areas of interest in Psychiatry are suicide, history of mental disorders, and Liaison Psychiatry.

Dr. Braquehais Conesa has participated in some of the most important research projects developed in Spain to investigate suicidal behavior. In 2008, she received the Alicia Koplowitz Fellowship and visited Columbia University in order to improve her knowledge in the field and to start collaborating on different research projects overseas.

In 2010 she has graduated and obtained a BSc Degree in Philosophy from the National University of Distance Education (Spain). Her areas of interest in this field are Anthropology, Oriental Philosophy, Philosophy of the mind, Greek and Roman Philosophy, and Materialism, among others.

Dr. Braquehais Conesa shares Terentius’ statement: “I am a human being, so nothing human is strange to me”. She is worried about the raising importance given to biology as the unique clue to understand the human being. She believes that there are different levels in which matter is organized and the methodology to study each of those levels cannot be the same, nor the results and conclusions of those different approaches.

‹ Barriers to Seeking Help for Gambling Problems: A Review of the Empirical Literature › The 9th World Congress of Biological Psychiatry