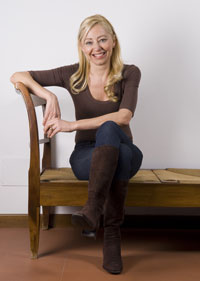 When I enrolled in the Medical School of Medicine in Pisa (Italy) I had no idea just what type of doctor I wished to become; I was interested in the human being as a whole and not in specializing in the study of any single function or organ. However, as soon as I had passed my exams in anatomy and physiology, I realized that I had become quite fascinated by the human brain and I became convinced that I would find research in this area the most fulfilling. I was also greatly encouraged in this by Prof. Giovanni B. Cassano, who, in 1979, had just become full professor of Psychiatry and who suggested that I prepare my final thesis in his Department. I did this and I duly presented the resulting thesis in 1981, when I graduated in Medicine.

The eighties were an exciting period for Psychiatry and I consider myself very fortunate to have undergone my psychiatric training during that period.

At that time, the prescription of psychotropic drugs was beginning to be more focused, as a result of increasingly detailed diagnostic criteria, Neuroscience was evolving rapidly and neuroscientific methods were becoming easier to use and, consequently, more generally available and affordable. They began to have a real impact upon clinical research and a true link was finally being established between laboratory data and clinical practice. Also, new and more targeted drugs, namely selective serotonin reuptake inhibitors, were being developed; these not only resulted in a radical change in the treatment of depression, but they also permitted the treatment of certain other categories of patients, such as those affected by obsessive-­compulsive disorder (OCD) which had long been considered unresponsive to psychotropic compounds. In fact, generally speaking there was a widespread feeling of enthusiasm; we all felt confident that further light would soon be shed on the mysteries of the brain and various neuropsychiatric conditions, now that it had become evident that “brain = mind”.

Since I was interested in biological psychiatry and wanted to continue the tradition of my Department, which had been biologically oriented since its foundation, I spent a part of 1983 during my residency in Psychiatry at the Neurochemical laboratory of the University of Oslo (Norway), directed by Prof. Elling Kvamme, where, while carrying out a study on glutaminase, I became familiar with the basic methods employed in neurochemistry.

When I returned to Pisa, I started working in my Department’s laboratory, which had been created some 20 years earlier by Prof. Cassano. We decided to focus on two main research projects, involving (a) the platelet serotonin transporter and (b) the putative endocoids acting on central benzodiazepine receptors, which offered the possibility of clinical studies involving large patient samples.

The first studies were carried out involving depressed patients and constituted the object of my Specialty thesis and my first relevant international publications (1, 2). After specializing in psychiatry, I felt the need to broaden my knowledge and also technical ability and I therefore began my residency in Clinical Biochemistry, which I completed in 1990.

During this period, the activity of our laboratory was attracting an ever-increasing number of medical and biological students, with the result that the group became substantially larger and a number of new working arrangements were begun with other Departments throughout the University of Pisa, namely those of : (a) Biochemistry and Pharmacology in the Faculty of Pharmacology (b) Immunology, Neurology, General Pathology and Pathology in the Faculty of Medicine (c) Cell Biology in the Faculty of Science and (d) the Department of Chemistry. The link with the Departement of Biochemistry became so constant that 5 years ago we were amalgamated into a single, much larger department called “Dipartimento di Psichiatria, Neurobiologia, Farmacologia e Biotecnologie”.

Some of our students began to take spells abroad, working with foreign Institutes; I myself went regularly to Augusta (Georgia) to work on various collaborative projects with the local department of Psychiatry and VA medical center.

This regular collaboration with different institutes abroad enabled us to broaden our focus and areas of interest and our research projects became more varied as a result. We began to perform pre-clinical studies, such as those in the rat and calf brain or in the human brain postmortem, where we characterized the serotonin transporter and different serotonin receptor subtypes pharmacologically by means of in situ hybridization (3-5). Recently we compared serotonin receptors in brain samples of patients with different psychiatric conditions, which had kindly been supplied by the NAMI Research Institute from Washington DC (8).

Since the 90’s, OCD and related disorders have attracted constant investigation throughout the world; in studies which we have carried out, we have demonstrated that all of these disorders have in common a reduction in the number of serotonin transporter platelets, in proportion to the severity of the obsessive-compulsive symptoms involved, which returns to normal levels after specific pharmacological treatment.

On the basis of these data, which would suggest common symptoms or dimensions, I built up a theoretical model based on two different dimensions, which enabled the recognition of similar alterations under different physiological conditions, such as that found with the early romantic phase of a loving sexual relationship or with the complex phenomenon of jealousy. The results of our study on romantic love became widely discussed, even amongst the general public, since for the first time evidence had been produced which showed that a widely recognized emotion or feeling might have a biological substrate (6). Further studies in the area of emotions, feelings and dimensions are in currently progress.

After the identification of the serotonin transporter in lymphocytes in 1998, we began to use these nucleate cells for exploring the transporter and other receptors at the level of posttranscriptional processes. At the same time, we became interested in the intracellular regulation of these structures and we have demonstrated recently that the manipulation of protein kinase of type C modifies the activity of the serotonin transporter in both healthy subjects and OCD patients, albeit to a different degree (7).

With regard to academic honours, my work has kindly been acknowledged by various bodies and I have received various prizes and distinctions: an Italian prize for research on serotonin and hypertension, the Ole Raefelsen Award for Psychiatry, received in Kyoto (Japan) in September 1990, the European College of Neuropharmacology travel award, granted in October 1991, and the Anxiety Disorder Award, granted during the congress of the World Federation of Societies of Biological Psychiatry, held in Berlin in July 2001.

Professor of Psychiatry and Director of the Laboratory of Psychopharmacology at the “Dipartimento di Psichiatria, Neurobiologia, Farmacologia e Biotecnologie”, University of Pisa, via Roma, Pisa, Italy

Academic records at the University

Scholarships, fellowships, and other academic distinctions

Dr. Marazziti has partecipated as a speakers in thousands of national and international congresses, meetings and masters.

She is in the editorial board of the following journals: “European Neuropsychopharmacology”, “Fundamental and Clinical Pharmacology”, “Journal of Depression and Anxiety”, “CNS Spectrums”, “Focus on OCD”, “Primary Psychiatry”, “Clinical Neuropsychiatry”.

Two best-sellers both translated in Greek and Portuguese:

‹ The hypothalamic-pituitary-adrenal axis and serotonin abnormalities: a selective overview for the implications of suicide prevention › Age effects on cortisol levels in depressed patients with and without comorbid post-traumatic stress disorder, and healthy volunteers.