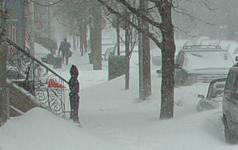 The syndrome of “seasonal affective disorder” (SAD) is a condition where depressions in fall and winter alternate with nondepressed periods in the spring and summer. It has been suggested that in order to be diagnosed as having SAD a patient must met the following criteria: a history of major affective disorder; at least two consecutive previous years in which the depressions developed during fall or winter and remitted by the following spring and summer; absence of any other Axis I psychiatric disorders; and absence of any clear-cut seasonality changing psychosocial variables that would account for the seasonal variability in mood and behavior. An opposite pattern, depressions in the summer and non-depressed periods in the winter (“summer SAD”), has also been described. These two types of SAD probably represent a subset of a variety of seasonal behavioral disorders. SAD has been included in the Revised Third Edition and in the Fourth Edition of the “Diagnostic and Statistical Manual of Mental Disorders ” of the American Psychiatric Association as “seasonal pattern”, an adjectival modifier of any form of seasonally recurrent mood disorders.

Many patients with SAD report disliking winter since their teenage years, though the problem usually becomes severe only in adulthood. Sadness, anxiety, irritability, decreased activity, difficulties at work, social withdrawal, changes in appetite, decreased libido, and changes in sleep are characteristic symptoms of winter depression. Most winter SAD patients have “atypical” depressive symptoms such as increased sleep duration, increased appetite and weight, and carbohydrate craving. Depressive episodes are generally mild to moderate. Patients with winter SAD may experience a reversal of their winter symptoms in summer: mild hypomania, elevated mood, increased libido, social activity and energy, and decreased sleep requirements, appetite and weight. Patients with summer depression usually report “typical” vegetative symptoms, such as insomnia and loss of appetite and weight.

What is this thing called “SAD”? A critique of the concept of Seasonal Affective Disorder