Necessity of paradigm – shift in psychiatry

Although the psychiatry is an important branch of the medical science, this one contains the most subjectivity. Several reasons prevent us from solving the present accumulated problems in psychiatry.

According to E. Kraepelin the pathology, the aethiology, the genetics, the symptoms and syndromes, the disease process, the outcome, the end state and the treatment of the Mental Disorders are exceptionally diverse, although there are evidences for the reasons of biochemical changes and receptor modifications inside the nervous system.

PARADIGM SHIFT is a fundamental change in the basic concepts and experimental practices of a scientific discipline. Thomas Kuhn (1922–1996)

Figure 1. It is a quadrangle. How can we connect the nine stars with only four direct lines if one star is allowed cross only once? At first sight five lines need.

When we make a paradigm-shift, we can see, think, feel and behave differently.

Figure 2. A paradigm shift is a way of looking at something differently. We must step outside from the box. When we change our paradigms, we make visible what we couldn’t imagine before. 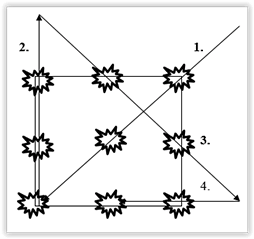 Paradigm-shift is indispensable at least in the following areas:

Psychiatry is mainly subjective but has objective roots. This particularly valorises the importance of the disturbances of perception, and the personality in the clarification of the psychiatric symptoms and mental disorders.

Dehydration as an end-of-life treatment option