Is suicide a Hungarian phenomenon?

Suicide rate has been extremely high in Hungary for years. The Hungarian suicide behaviour is a curious phenomenon and the suicide rate is high among the Hungarian people all over the worlds. 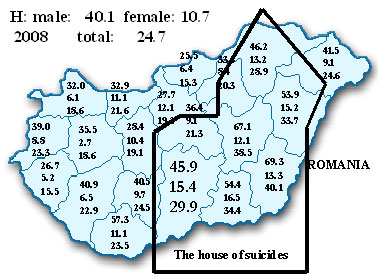 After the First Word War, Hungary lost 67.3% of its territory and 58.4% of its population. Examining the suicides in the Harghita County in Romania, we found that the number of suicides is extremely high among the Hungarian people after 90 years of the Treaty of Trianon [June 4th, 1920], in spite of the fact that Romania has a low suicide rate. At present the ethnic Hungarians in Harghita County, Romania, comprises 84.64% of the population, and 93% of all suicide victims are Hungarian.

The number of suicides and suicide rate, 1991-2009. Hungary vs. Bács-Kiskun County (Hungary) vs. Harghita County (Romania).

Despite that more than 90 percent of those died in suicide and those attempting one suffer from a psychiatric illness in the time of the event, which is in most cases major depression (56-87%), alcohol or drug related illness (26-55%), schizophrenia (6-13%), or personality disorders, especially borderline personality disorder, the social and cultural factors increase the risk for suicidal behaviour and have a great importance both in Hungary and Hargitha County.

What? Botox injections can mitigate depressions?